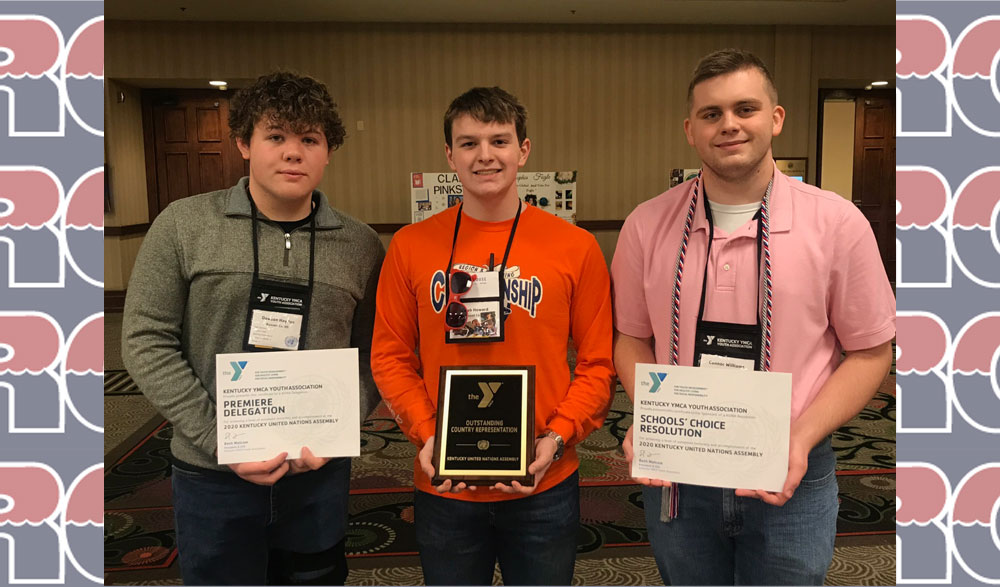 On March 5-7th the RCHS Y-Club attended the Kentucky United Nations Assembly (KUNA) at the Galt House in Louisville. Members of the RCHS Student Y represented the country of Chad. They collected artifacts and created a World Expo table display about the country, and they wrote a resolution to present to the mock UN concerning the well-being of children in Chad and other nations.

The resolution was voted on by 1,000+ students, and was chosen as the highest ranked.  The resolution authors (Connor Williams, Caleb Howard, and Dawson Haydon) were given the opportunity to present the resolution at the General Assembly in front of the entire conference.

Some RCHS Y-Club members received individual awards at KUNA. Connor Williams received an Outstanding Speaker award, and Caleb Howard was awarded Outstanding Delegate. The RCHS group was given the title of Premiere Delegation. They were also awarded the Outstanding Country Representation Award, which is given to the country who best represents their culture through their Resolution, World Expo Booth, Country Sign, and participation in debate.

Y-club adviser Laura Davidson expresses how proud she is of the hard work and effort shown by her club members. Congratulations to the RCHS Y-Club for their accomplishments this year at KUNA!