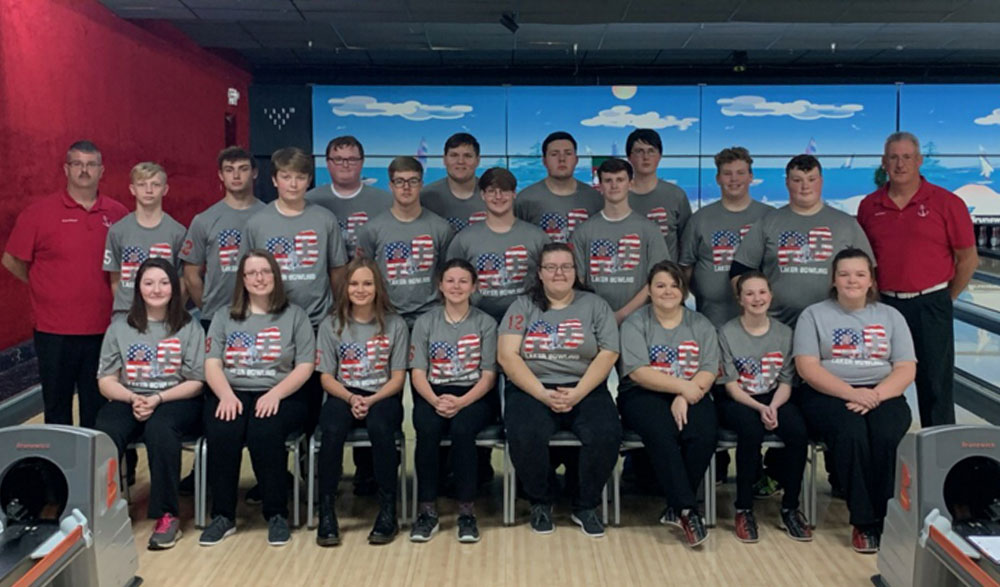 It has been another action-packed week in the Laker Sports world, with all of our winter sports teams competing.

The Varsity Swimmers of  Gaby Alvizo and Emma Rae Phillips continued their dominant seasons with victories in both of their individual events.  Morgan Jones, Camryn Woodrum, Max Lawson, and Michael Little also added victories to the Lakers total. The Lakers are back in action on Tuesday night as they host a small invitational with Rockcastle, Somerset, Taylor, Campbellsville, and Elizabethtown.

On Saturday the RCHS Cheer team competed in the KHSAA State Cheer Competition at the Horse Park. They placed 5th overall in the Gameday division. We would like to congratulate them and wish them luck at Nationals in February.

On Thursday the Laker Bowling team hosted the Barren Co. Trojans at Laker Lanes. Our Mighty Lakers finished with 7 wins and no losses. High scores for the boys were Dylan Stringer 300, Zack Kean 265, Chris Smith 228, Will Aaron 212, and Nate Eysenbach 203. Our Lady Lakers finished with 2 wins and 5 losses. High scores for the girls was Makayla Melson 193, and Brooklynne Carroll 168. Big congratulations to Dylan Stringer for bowling a “perfect 300 game” which will add his name to the “300 List.”

On Saturday the Mighty Laker Bowling team traveled to the Danville Bowlarama to compete in the Baker Bonanza. Our Mighty Lakers and our Lady Lakers both qualified for the final four bracket. Our Lady Lakers faced Harrison Co in the semi final round and were defeated 3 games to 0 to finish 4th out of 11 teams.

Our Mighty Lakers faced Boyle Co. in the semifinal round and won 3 games to 1 to move on to the championship game against Daviess Co. In a very tough round our Lakers won the first and second game then lost the third and fourth game to send it to the 5th game tie breaker. Our Lakers took it close to the last frame in the game and came out on top 209-197 to win the championship in one of the most prestigious tournaments in the state.

The bowling team travels back to Danville on Tuesday to compete in the third round of the Tuesday night tournament series at 5:15 CT. That’s all for last week in Laker Sports! Good Luck to all teams competing this week!